Merry Christmas.  It is been some time since I have posted on here.  It has mainly been due to lack of things to do than anything else.  That and a lack of desire to paint.  However I have been bitten by the bug again so I have begun yet another project.  Specifically, Ground Zero Games 15mm Krav'ak.  I wanted an alien race of my Gruntz 15mm games and these guys fit the bill perfectly.

I have always been intrigued by the GZG Krav'ak range but I knew the models were scheduled for an updated sculpting so I have been waiting until the new ones were released before diving into yet another 15mm range.  The new models were well worth the wait.  I hope that there are support weapons coming for these guys in the future.

The range comes in both figures with helmets and without.  The heads have been completely redone.  The details are quite satisfying to the eye and quite easy to paint.  My biggest dilemma was on how to paint these guys.  Dark colors often look quite bad in 15mm so doing a dark grey or black armor/uniform was out of the question. 15mm often requires extreme highlighting, to the point of almost cartoonish, to have any visual appeal on the tabletop.  That is not to say that realistic schemes look bad.  The issue is that from a distance muted colors often appear as dark blobs rather than distinct patterns.

I settled on a medium grey, highlighted up so that it appears like a light blue grey.  This finish provides suitable contrast and allows the eye to see the details even at some distance away.   I was able to bang off almost 80 models this week with this finish.  I based some of the officers on larger bases to use as commanders for Gruntz. 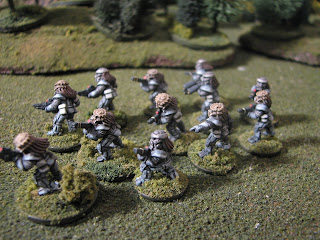 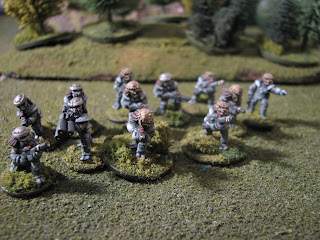 I do not yet have any power armor troopers or cavalry yet, but those are slated for painting in the new year.
Posted by Darebear at 13:17