I finally got around to taking a group photo of my War of the Roses Burgundians today.  This army was in my queue for about 4 years, unbuilt.  It was basically a trial army (4 boxes total), so I did not purchase everything that I normally would for a large force.  The infantry and missile troops need to be increased substantially, by at least another box.  There are two cannons left in my queue to complete as well.  They would count as Elf Ballistas in Oathmark.

I decided to base these on 25mm squares, specifically for Oathmark.  However, in hindsight I wish I had based them on 20mm instead.  It would have made them easier to use in KoW and older Warhammer editions.  The thing with bases is that you can always increase unit footprint via using special movement trays.  However, you cannot downsize as easily.  Oh well. 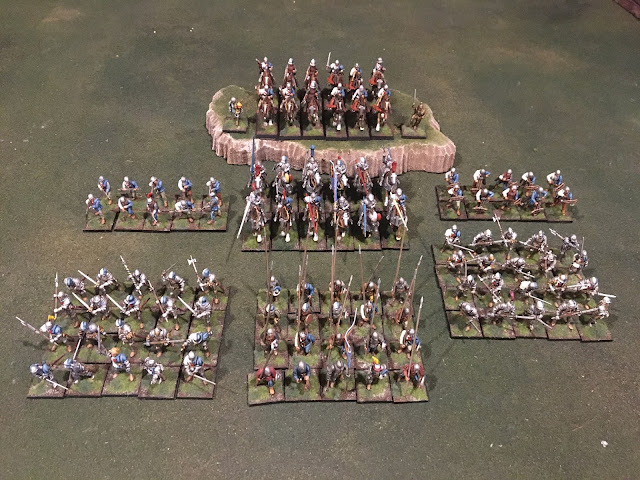 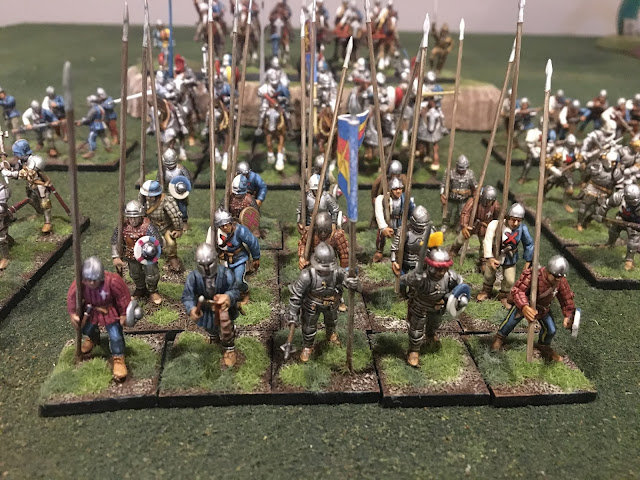 There are a lot of things I would have done differently for this force.  I consider it a learning experience.  The Perry kits allow so much customization that I was really overwhelmed by the whole assembly process. 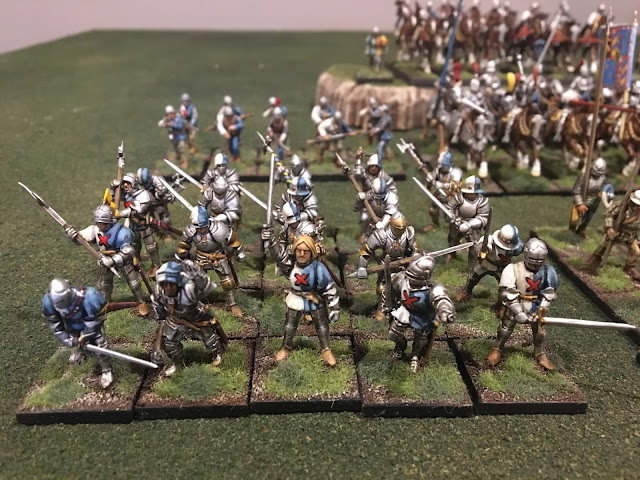 The Foot Knights are highly detailed.  There is a lot of stuff (bits, straps, ect) to paint and quite frankly I was a bit lost for awhile.  The belts are very small and hard to paint.  GW Contrast paints would have worked better.
I used Mig Steel for the armor.  This was a disaster since other acrylic paints did not want to adhere to the steel basecoat.  I would do these totally different now, with different effects and technique. 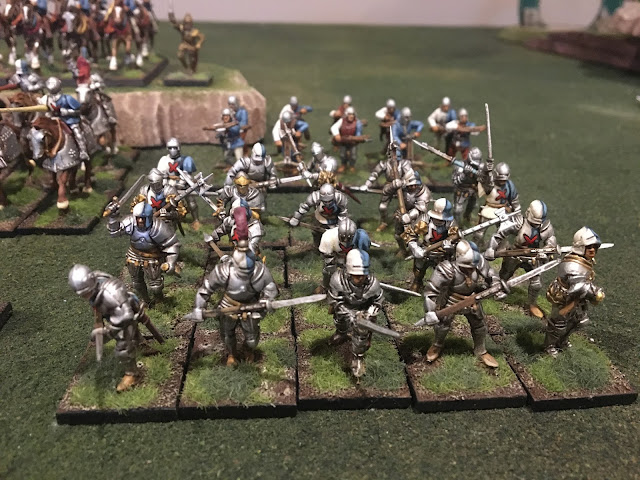 The crossbowmen were a challenge.  I had to research crossbows to know what the heck the various parts actually were.  I had no clue what a Windless crossbow was.  I still have all the Pavises left for these guys.  I could put them on their backs or attach them to their bases as a shield to hide behind.  Not sure what to do with them. 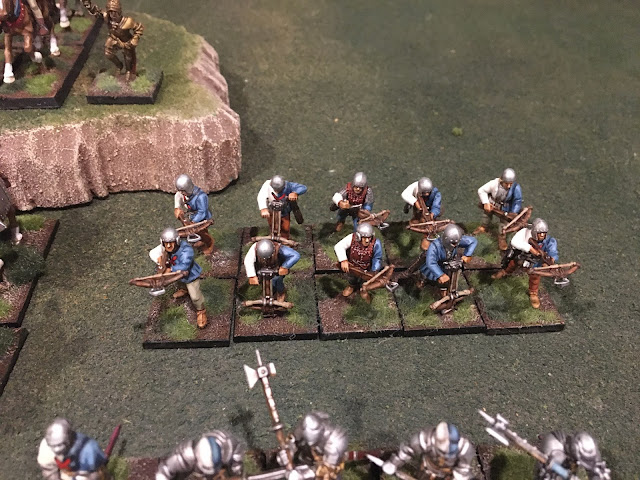 The mounted knights were a painting disappointment.  I could have done better and I really wanted to do spiral colored lances.  I tried but failed miserably.  The barding was a pain in the ass to assemble (it does not want to fit 100% at the front of the horse, requiring sanding and filler to get a half decent look). 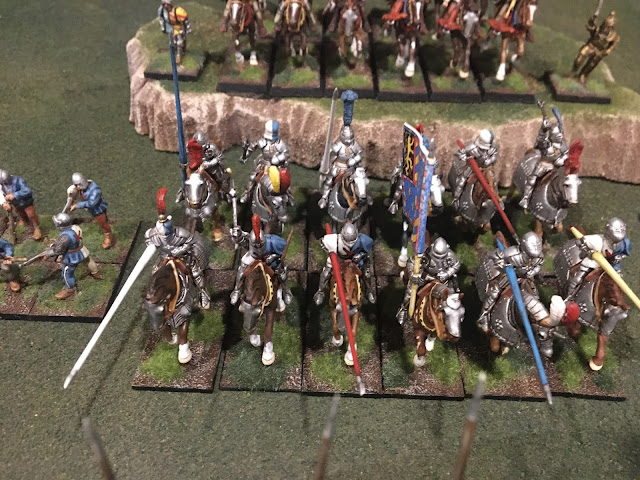 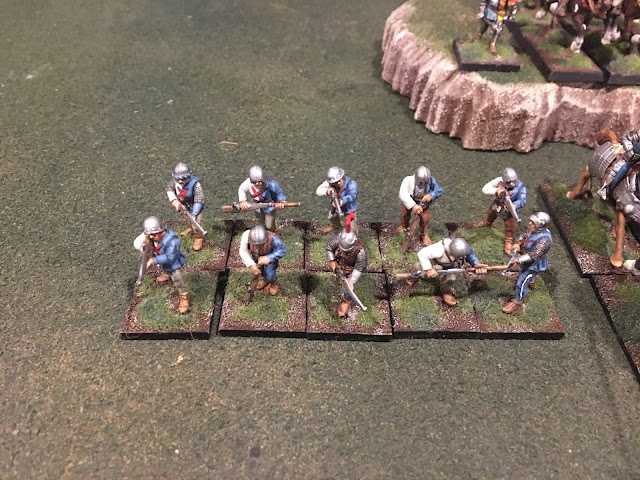 The mounted crossbowmen were a bit of a pain to paint.  Lots of individual parts.  There were no assembly instructions so I had to research what went where. 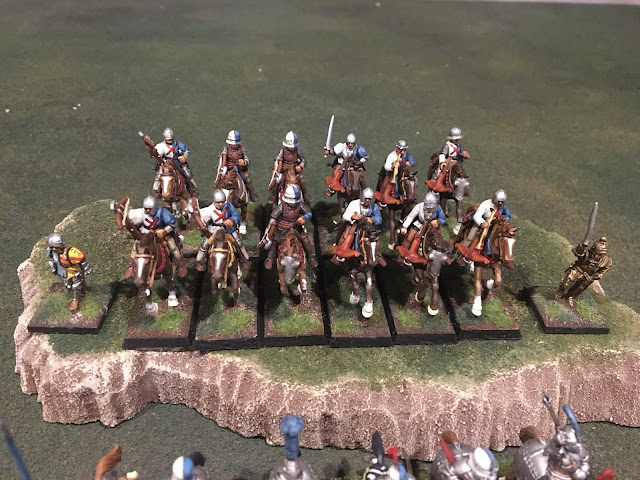 The worst part of this whole project was painting the Burgundian crosses.  Black then lined with multiple shades of red.  Getting complete uniformity across a whole army (cross size) was impossible. 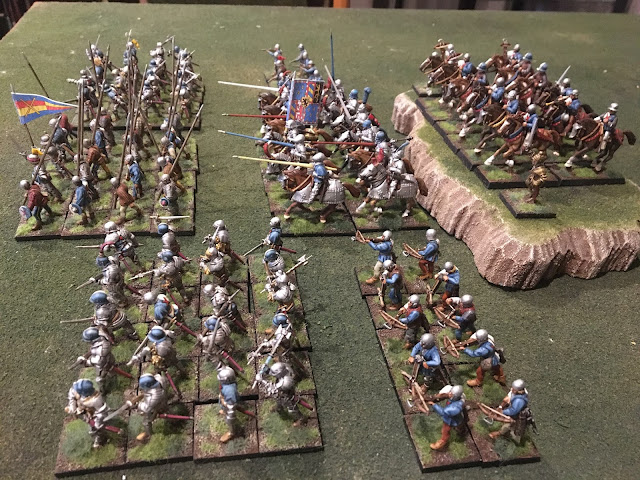 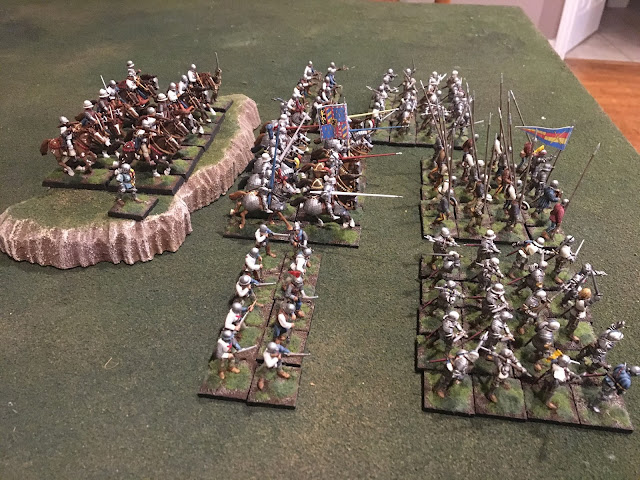 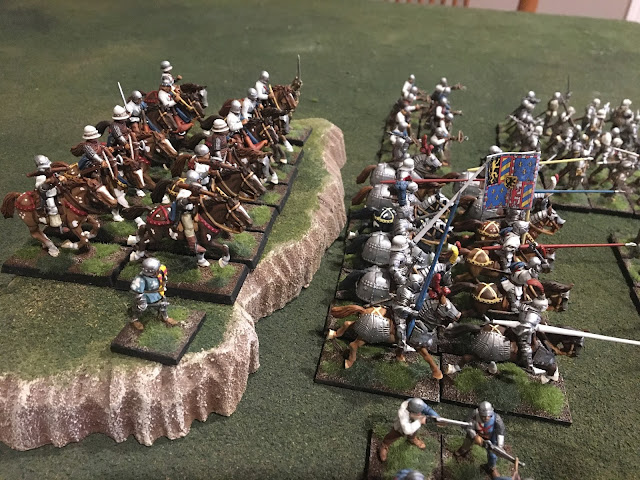 So, that is it.  My first foray into historical miniatures.  In hindsight I should have done an easier paint scheme.  Burgundians, with their white and blue livery and red diagonal crosses were much more challenging than I bargained for.  Anyway, it was a good learning experience.  I now know how to build these kits and what and what not to do.  I could have done a lot more color on the knights....that is my biggest disappointment.  I am on the fence on whether to keep them or sell them off.  I need another 40 or so troops (infantry and archers) to truly finish the army off for Oathmark.  Sadly, as it is, the force is far too small for Kings of War.  I still have two cannons left to paint up.  Not sure if I will do them in Burgindian colors or not.

The Perry plastic kits, IMO, are superb.  There are innumerable build options and the level of customization is huge.  Plus, they are cheap when compared to comparable fantasy kits on the market.  If you want a realistic and large human army for historical or fantasy wargames, then look no further than Perry Miniatures.